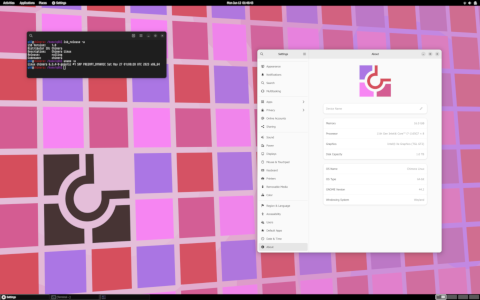 There are some initial live ISO images available for testing, alongside experimental binary package repositories. Keep in mind that these may have various issues and are pre-alpha quality.

All images are available here.

There are also aarch64 platform images for Raspberry Pi (3 and 4, all variants including 400 and compute modules) and Pinebook Pro. These are strictly console-only, but it is possible to install a desktop into them.

In addition to ISOs and device images, there are also rootfs tarballs (in base-minimal and base-core variants for all architectures as well as platform tarballs for the same devices as the device images).

The graphical images are universal (you can boot them either into GUI or into console depending on the bootloader menu entry).

The x86_64 images can boot on either BIOS or UEFI machines. The ppc64le images require a SLOF-based or OpenPOWER machine with at least POWER8 processor or equivalent (VSX support is required). The aarch64 images are purely for UEFI machines.

The images are hybrid (you can boot them off either USB stick or optical media).

The AArch64 device images can be flashed directly onto storage media, typically an SD card (or eMMC storage).

At least 1GB of RAM is recommended for graphical desktop. You may need more than that if you choose to boot with the ramdisk option, as the whole system is copied into RAM in those cases. Console images should be able to boot with much less (likely as little as 128MB).

The GNOME images by default boot into Wayland, unless that is not possible for some reason. If you want to force X11, there is a special bootloader option for that.

It is also possible to boot the images via serial console. You can do that by editing the right bootloader entry and adding a console= parameter, e.g. console=ttyS0 for x86_64 machines and console=hvc0 or console=hvsi0 for POWER machines. The image will detect this and enable the respective agetty services.

For the time being, the ISO images contain the complete toolchain to bootstrap the cports tree from source code without using bootstrap.sh. This will not be the case with production images with binary repositories available.

There are also installation instructions.